I’m a kid again. It’s the last few days before Christmas and I can’t wait to see what Santa has left in my stocking. Except this isn’t Christmas, it’s the week before the Argus, and at 47 I’m hardly a kid any more But that’s about where the difference ends. That same glorious, nervous, excitement has been building for a few days now. And just like that boy from my past, I probably won’t sleep much on Saturday night and I’ll be up early on Sunday morning.

One of the many things that makes the Argus special is the the unpredictable nature of the Cape weather. All races have the potential to go astray with mechanical problems, punctures, or a crash bringing down the bunch you are riding in. But those possible mishaps pale into insignificance to the mess that Argus weather can make of your training, preparation and race plans. In my four previous Argus’s we’ve had such extremes as the raging storm of 2009 which pummelled us with gusty blasts from before we’d even crossed the starting matts, to last year’s calm and mild weather which gently coddled us to the finish at Greenpoint. 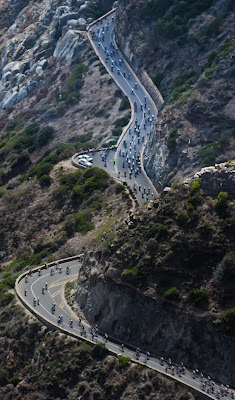 There are many aspects that makes the Argus a special day: the camaraderie of 35,000 fellow riders; crowds of 100,000 supporters partying, and occasionally spraying water from a garden hose to ease the mid morning heat on our backs; and then there’s the hills, in particular Chapmans Peak. However fresh I feel rounding the corner into sight of Hout Bay, the next glance at the road ahead never fails to put a knot in my stomach. A majestic tarmac sliver winding up the rocky cliff face, filled with a continous snake of cyclists battling their way to the top. You wish you were already at it’s head, but as with every other part of the Argus, even this wonderful torture is over too soon and you’re flying down the other side with one last hill to overcome.

Memories of those previous rides help keep this year’s ride in perspective. I’ve trained harder and longer, and there’s potential to set a personal best time. But in all honesty, although I will push hard, if the day or my riding don’t make that possible so be it. The races I’ve done this season have far exceeded my expectations, with best times and fastest average speeds in every one of them. The Argus is the last ride of the season, time to just enjoy riding closed roads through the most stunning scenery imaginable.

This year too, I have the added bonus of Yoli and my 3yr old son Ben waiting to cheer for me at the finish. He’ll have no idea what it means to me to be taking part in it, but someday maybe he’ll read this and remember that feeling of waiting for Santa.