It’s a couple of days since the Argus for 2012, and after a gym session and massage, all that remains of the day are a few lingering aches and a ton of great memories. Foremost of those for anyone who took part this year will be the soaring temperatures they were faced with during the latter half of the ride.

Standing in the start chute in the full glare of the morning sun at just past 8am it was already clear that heat was going to play a big part. Once we were underway though it really didn’t seem too bad over the first half of the ride. A bigger factor during those early kilometers was trying not to crash into waves of charity and corporate groups who seemed not to have read any of the pre-race guidelines, and opted instead to spread out across the full width of the road and just stop dead in front of you on a whim. Despite that minor annoyance, there were a few bunches of riders from my TT start group, and also groups just ahead and behind, and we made quite decent progress down the blue route, over the evil stretch of short climbs on Boyes Drive, and through Simonstown. 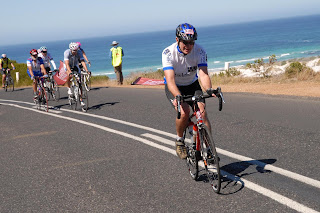 Coming up on Millers Point my Garmin (now reliable again) was showing close to the pace I’d need for my 4:15 target. I knew before we set off a sub-4 was likely to be beyond me in the expected heat, so I’d already adjusted expectations even before the hold-ups getting through the crowded sections. The new plan was holding up though: my water bottle should last out until the second or third water stop after the climb of Smitswinkel looming just ahead; and my energy drink was only just over half gone, also about right for current progress. How quickly things can change.

As the road turned in to the mountain for the last stage of the climb, there it was, the first waves of real heat that would be mercilessly sapping our reserves for the rest of the ride. As we crossed from the East to the West of the peninsula the heat rose from a manageable 27 to 28 degrees, up to 38 degrees in a matter of about 40 minutes. After a nice fast downhill race from the top I pulled in to a water stop. I wondered about filling both bottles, but the stop was busy and I wanted to get going as quickly as possible. I knew I’d need to stop again, so I figured it was better to hope for a quieter stop further on and then refill both.

Scarborough and Misty Cliffs was the usual brief but refreshing delight of cool misty air mingled with the smell of the ocean as we rode alongside the breakers.Sadly, it’s also a fast stretch of riding so is gone all to soon, replaced this year by a sweat drenching slog over Slangkop and down to Ocean View and Noerdhoek. By this stage, I knew a 4:15 was gone and it’d be a battle even to equal my time of last year. Just before Chappies I took a quick stop, filled one bottle with water and the other Powerade. That’s unusual for me, but I knew I needed more than just water and the energy gels and bars were now just making me feel sick rather than giving me anything usable. Whilst waiting for the bottles I also downed a coke and a powerade for good measure, before setting off into the furnace again. 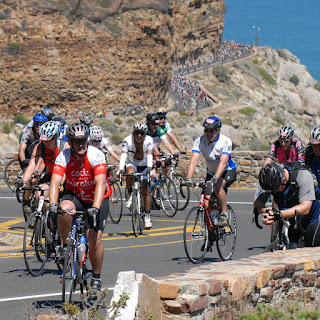 The next hour and a bit getting up Chappies and the one last hill beyond was honestly the toughest of any Argus I have done, including the storms of 2009. Certainly the closest I’ve coming to bailing, and had it been any other ride I suspect I may have stopped at a bar and called it a day. There’s a magic to Argus day though that demands more from you – and so far, has always found it. Every year, something has inspired me over that last barrier of Suikerbossie, and this year’s arrived in the shape of a rhino. Not a real one of course, but the tandem bike costume was almost as big as a rhino, decked out in Saving Private Rhino logos. My legs found some new strength and I pedalled hard, but the rhino beat me to the top. Hopefully the fate of real rhinos in the wild has an equally successful outcome, unlikely as that seems right now.

After Suikebossie it’s all downhill, quite literally. Apart from the minor bump of Maiden Cover rising up after Camps Bay. Small it may be, but that was where my legs gave up and locked solid with cramp. Luckily the work was done by then and I could pretty much coast to the finish. I crossed the line, greeted by the delightfully welcome sound of Yoli and Ben cheering from me at the line. The ride and I were finished, for another year.

As it turned out, it had been equally hot and unpleasant waiting for us to finish, so I’m not sure Yoli will volunteer again if it’s as hot in future year’s. It was lovely to have a welcoming party though for a change, especially one bringing much needed water.

My official race time was 4:36, only 7 minutes quicker than last year. The much tougher conditions. though are evident in my best ever race position of 47%, much improved on last year’s 58% and the first time I’ve made it into the top half of the finishers.