This weeks particular torture served up by the autumn and winter training programme was hill intervals. Suffice to say, that my first attempt at these resulted in a lot of sweating, gasping, and a peak heart rate of 175bpm. In theory that is 2bpm more than 100% heart rate, assuming of course that you believe the standard age based calculation of 220-age. 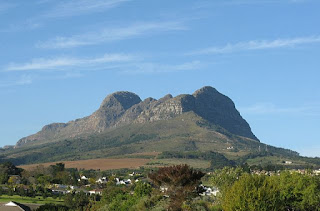 Anyhow, back to the hill laps – I devised a nice little circuit that I have called Hel’s Hills. It loops around various angles of the hillside on which we live, the Helderberg.  The benefit of being local is that I’m training almost as soon as I leave the gate. The downside is, well, the circuit! Parel Vallei road starts out with a decent climb, steep but manageable. As it swings into Silwerboom road though the gradient pitches upward sharply  and it’s a battle even on the small blade and 25 tooth rear cog to keep any kind of momentum going. First lap around I was sucking in gulps of air and battling pretty much all of the last and steepest section in a standing climb for. Second lap around I managed better, staying in a seated climb for most of the hill, with just an occasional standing surge to stretch out and keep my speed above a crawl.

I decided my legs needed a more gradual ascent between laps to loosen the legs before the next assault, so threw in a short loop down to Old Stellenbosch road and back up Irene avenue. The extra section making each lap into a figure of eight, and adding a nice gradual hill that you can steadily work up a good pace on. The only part of the circuit I’m less than sold on is the tearing descent down the other side of Irene, very steep and a badly placed 4 way stop and left turn mean that instead of running down it at speed, I end at the bottom with seriously over heating brake blocks. It’ll do for now though, 11km per lap and 300m of climbing, this week’s session being 2 laps making for a respectable start of 600 vertical meters for my first week of hill laps. Hopefully over the coming weeks I can speed up each lap and build up to 3 and 4 laps in the time clawed back from each faster lap.

This week had a few other cycling related highlights too. The hub forum served a considerable amount of interest in LEL 2013. It seems quite a number of SA based cyclists have an interest in taking part, one of whom also lives in Somerset West which could tie up nicely for training sessions. Also via a thread on the hub, it looks like we have the makings of a team for the Double Century in November. Our group will be meeting for an inaugural ride together on 22nd April.  More on these in future entries as they develop.