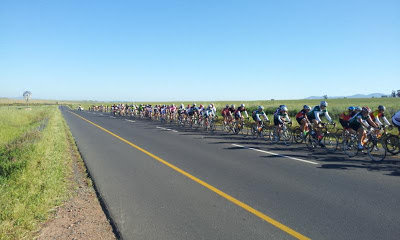 Any hopes I had of a relaxed pace on the One Tonner were gone inside the first 20km or so. To be honest, I hadn’t really expected anything different despite suggestions that we’d treat it as just another training ride. Race days never quite work out like that, you get caught up in the adrenalin, the surging bunches of  riders, and the constant ticking of the ride clock. So when a group of riders led by Martie (a well known local rider and spin instructor) passed us I didn’t really need to glance across to see the glint in Des’ eye, who was currently alongside me working at the front of our group. There was no lack of enthusiasm from the rest of our bunch either. Even though at least three of us including myself were One Tonner virgins, and less than a seventh of the way into our longest ride to-date, a resounding “go for it” came from behind, so we chased the group down and latched on. Our speed immediately picked up, and the mood of our ride was set – this wasn’t going to be a slow pedal thumping effort just aiming to finish.

Swinging on to the R304 it was a welcome relief to feel a much lighter headwind than forecast. This, combined with our large pack of riders, made for a very fast stretch back past the silos and on to the R312. Strangely, we hit the strongest winds of the day on this short stretch of road back towards the R44 – so much so, that when Elizna and I got unhitched from our group on a short ramp, there was simply no way to bridge the gap. Fortunately, Dylan pulled alongside, having also got separated in the confusion, and we soon saw Penny and Des drop off to help us work against the wind and get back to the group.

Free-wheeling down the R44 we passed our earlier starting point at Nelson wine estate, completing the first 66km loop of the route. I felt a tad foolish at having been worried by the 10:15 cutoff time when I looked down at my watch and saw it wasn’t yet 9:30. Spirits were bright, the day was sunny but not hot, and the wind was light. But the pace was also fast, much faster than I was used too. I knew there would be a price to pay later but there really wasn’t a lot of point stressing on it, so I sat back and enjoyed the riding.

Our pace didn’t slow either on the leg from Wellington towards Hermon, in fact for a short while it even picked up as we latched on to a passing group in which Penny’s brother was riding. The 85km water point came up quickly, and we stopped for a quick refill and load up on snacks. Shortly before the Bothmaskloof climb we crossed the 100km mark, and my legs and energy reserves were starting to feel the pace. Later on Des commented we’d gone through the first 100km with an average speed of 28.5km/h, which for my fitness level is flying. I could happily have stopped right there, content in the knowledge that we had shredded my previous best time for 100km. 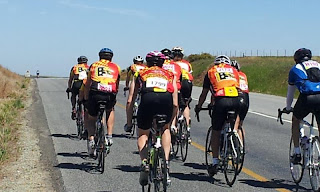 Just a few kilometres further on at the top of the climb, I nearly did stop. The pace caught up with me, stomach cramps kicked in, I started to feel nauseous, and in a repeat of Wednesday’s training ride the fuel tank seemed empty.. It’s amazing what the encouragement of your team mates can do though, and for the second time in a week my fellow riders helped me keep pedalling even though the body was ready to quit. The long downhill from the top of the climb was a welcome relief and breathed some life back into legs, lungs and spirit, and although I was tired and my pace had dropped, I stuck in there, pulled along by the great spirit in our team.
One of the TV motorbikes followed us along this section of the route, the rearward facing cameraman filming Penny as we sped along. The same crew filmed a couple of us, including me, at the next water point around the 130km mark. I really wasn’t at my best by that stage, so hopefully that piece of video ends up on the cutting room floor. 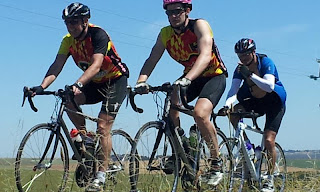 The right turn off the R45 was a very welcome sight. Even with both legs starting to cramp, it was the first point at which I was fairly sure I would actually finish. Adele dropped to the back and rode alongside me for a while, similarly delighted to be within striking distance of the finish. She’d not had a chance to train for the ride, and had made a very last minute decision to take part. Over the last 5km I really started to struggle, Dylan sat directly in front and towed me up the last couple of short ramps, even handing me his bottle for a couple of swigs of Powerade to give me a shot of energy to reach the left turn back on to the R44. Penny and Tom were waiting at the turn, and the rest of the team had only just started the last downhill roll to the finish. 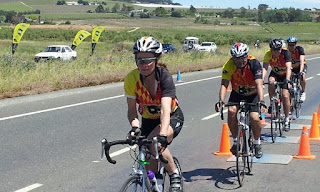 With no more pedalling to be done, conversation picked up, spirits rose, and the finishing mats soon came into view. Our whole team crossed the line together, with a finishing time of 5:54. In my wildest dreams I hadn’t imagined completing my first One Tonner in under six hours, making it not just the furthest I had ridden but also the fastest average speed of my previous PPA rides. Dad’s One Tonner had been my inspiration to take on the ride, but on the day it was the unceasing encouragement of my team-mates that got me to the end. Without them, I’d have struggled to finish at all.

All pictures by Peter Nolan.