I was always under the impression that my problems getting going again in January were due to the dark and dim winter days in the UK. But there must be more to it than that, because despite the bright sunny summer days here in South Africa, I still find myself short of motivation and energy come the start of the New Year.

This year has been no exception – every ride has felt hard and left me somewhat battered at the end. And it’s more than a little disheartening to feel yourself struggling at distances of 120km when in a few months time you need to be doing three times that distance several days in a row. So when I read the email from the folks at Sufferfest announcing their indoor virtual tour it immediately grabbed my attention. Not only might a change of training routine shake up my training and kick some life into my leaden new year legs, it would also see me putting some kilometers on my so-far underused Tacx Bushido indoor trainer and TrainerRoad account. Aside from that, it also sounded like fun – in a masochistic, “pedal myself into a soggy suffering pulp” kind of way. 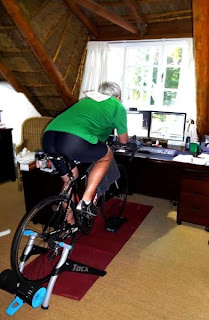 Four stages down, and I have to say, I’m enjoying it immensely. The training videos are awesome, with kick ass sound tracks and very cool segments of cycle race videos to whip you into performing to the max. They’re hard too – in some cases very hard. It doesn’t hurt either that there are some very decent prizes in the draw for those who complete all nine stages, but the real prize I can already feel will be quicker legs. When out on the road, I tend to thump at the pedals with heavy gears and low cadence. Whilst this may actually be ok for a long endurance ride like LEL, it’s not particularly good form for shorter faster rides and general riding. The indoor training videos are forcing me to a use cadences of 90, 100, and 110+ – which although painfully unfamiliar at first, I’m slowly starting to be able to maintain for longer and longer periods. As well as focusing me on my pedal stroke, I think there might be an increase in my Functional Threshold Power too – the level of power you can sustain for a 1 hour period. When I measured this towards the end of last year, it came in at a lowly 171 Watts, but it looks like I’m already achieving above this level in the power stats from the tour stage videos. All good practice for the last two races of the year over the next few weeks.

Sunday was probably the toughest day so far – since I had to find time and energy for the tour stage in addition to the usual club ride.  Given that the tour stage was a double header, with two videos back-to-back, it clearly wasn’t going to be a good idea to try and do a 100km+ club ride too. So I decided to cut the ride short in Stellenbosch, and grab an opportunity to have a coffee with fellow LEL aspirant, Emmerentia Jacobs. The hour or so we chatted proved an informative and inspiring break from the normal Sunday pedal thumping routine. Whilst LEL may be a new ride to both of us, Emmerentia completed the previous PBP and had a wealth of tips and experience to share on the realities of long audax rides, and preparing for them. The nuggets of advice she shared were too numerous to list here, but one which resonated was the the idea of a weekend ride to Langebaan – an idea Yoli and I had also discussed as a way to get a long back to back training ride under the belt, combined with a family weekend on the beach at the same time.

Riding back from Stellenbosch, my LEL ambitions were rejuvenated. Feeling relaxed, I stopped stressing about struggling on recent rides and just enjoyed the few kilometres home at a nice steady pace, already looking forward to throwing myself at the next tour stage on the trainer that evening. A valuable lesson learnt on the benefits of mixing things up rather than going stale pounding the same routine. It’s not done any harm to my training stats either, with January looking to be on track for 900km, a considerable uplift on my monthly averages of last year.