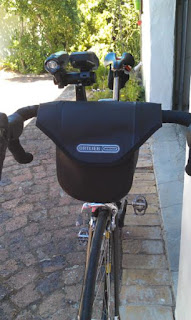 This week’s rides have seen the first of what I suspect will become a regular occurrence over the coming months – testing the components and ideas I have for LEL bike setup to see if they work as needed. It’s rather an odd convergence of my cycling passion with my day job, since that also involves testing, albeit there I’m creating tools to help other people do their testing.

Pictured right you’ll see the Ortlieb 2.7L handlebar bag mounted on Jolly, with a Lezyne Super Drive XL and my 8 year old Garmin Etrex Vista C peeping out over the top of it, mounted on a Topeak bar extender. This represents the greater part of my planned handlebar setup, even though I hadn’t intended to mount all of it quite so soon. I started out just wanting to see if my old Etrex suffered the “power off due to battery jitter” that I’ve read plagues many units. The Garmin bike mount would not fit direct on my bar though, which led me to mount the bar extender, and before long I realised I may just as well mount the whole lot to make sure it all fitted together.

Having mounted the Lezyne light, it made sense to leave earlier than usual so that the morning was still dark enough to tell whether the beam was bright enough and projected high enough over the Ortlieb bag to be usable. On LEL this will be my backup light, the primary light being a dynamo powered SON unit mounted on the fork crown and shining out under the bar bag. Testing that will wait for a future ride though, for now my main goal was to prove the backup would be effective if needed, and also get an idea on whether actual battery life was less than claimed. So on the rides today an Wednesday I’ve left at 5am to crank out a quick 18km extra distance ahead of the club ride start of 6am at Waterstone.  My concerns on the light immediately vanished – a tiny amount of beam gets clipped by the bag top, but what is left is plenty bright enough on both medium and high settings, and usable on it’s lowest setting if the worst happens and I need to ride long hours on backup light alone. 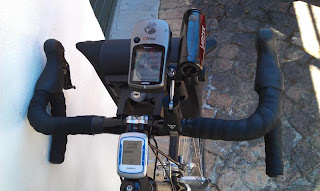 The Etrex took a while to find satellites and start trip recording, but once it did the figures it logged matched exactly with my normal Edge 500. Both can be seen right in the top view of the layout. On LEL, the Edge will not be present, it’s place on the stem will be taken up with a clip for printed instructions as backup to the GPS, should that fail. But for now, it stays there to see if I can rely on the Etrex.

At this stage, I can cut to the chase and say that after a 115km ride on Wednesday, and another 100km today, the Etrex has performed spot on. I’ve no idea if the jitter is something which develops over time, but for now it looks like the Etrex has been retrieved from the back of the spare gadgets cupboard and has a new role to play helping me on LEL.

Another thing that has been a pleasant surprise is that the setup doesn’t seem to affect bike handling too badly. The weight of the front end is noticeably higher, which of course you start to feel on hills and as the rides get longer. It also makes the steering a little twitchy – a slight veer of the steering has a tendency to become a major swerve and you need to quickly correct it to avert disaster, especially when riding two up in group formation. But it didn’t take long to get a feel for this, and by today’s ride I wasn’t wobbling around any more than usual. I’m sure the bar bag adds a bit of wind resistance too, but given LEL is not about racing speeds, I don’t think this will matter much. I am glad I didn’t go with the bigger 5L bag though, I reckon that could be a handful and not really worth it for the extra space.

So all in all, a decent first week of LEL preparation and testing. Physically and mentally though, I’ve probably been the weakest link these last two rides. Motivation to get out of bed and out the door has been lacking, and I’ve doubted myself towards the end of both rides. The energy sapping high temperatures haven’t helped though, and nobody said training for a 1,400km ride would be easy!

The first of the logs below was direct from the Garmin, second was from the Edge 500, but could have also been from the Garmin if I hadn’t wanted the heart rate data logged.

All photos by Rob Walker