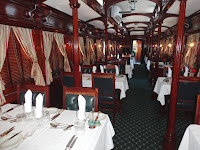 You might be wondering what pictures of a train are doing on a cycling blog, and I have to confess the reason is a little tenuous. The last few days have been spent on practically every form of transport except a bicycle, starting with a flight up to Victoria Falls, and concluding with a train journey back to Johannesburg on the Rovos Rail, shown in these pictures. The owners bill this the Most Luxurious Train Journey In The World, and after three days and two nights of pampering I would concede it’s not merely marketing hype. It really is (or was for us) a faultlessly indulgent experience. An equally tenuous reason for including pictures of what has kept me from riding is my Dad. I’ve mentioned before how his stories have been an inspiration to my cycling, and trains were another of Dad’s great passions.

As wonderful as the break was, it’s also something of a worry at such a pivotal time in the leadup to this year’s Cape Argus. The previous weekend I made an impulsive entry to the Medallion Tour de Stellenbosch. I’d never done this race before, and even though it wasn’t in my original plan it seemed like a good way to get a few more race kilometres under the wheels before the big day. Unfortunately, for the second event in a row, my pacing was hopeless and I failed again to temper the early enthusiasm. Racing too hard to stay with a bunch well above my level, the result was predictably similar to the 99er – I suffered a serious bonk around the 35km mark, and slowed considerably over the next 40km or so. The difference with this race was the 35C heat. Although I did manage to recover some pace back in the last quarter, my finishing time of 3:26 was around 15 minutes slower than I had a realistic hope of achieving.

It was only looking at the ride stats later on Strava that I was able to gain some perspective. With an average pace of 28km/h, it had actually been my second fastest race to date. Looking at the stretch from Paarl past Fairview winery and up to the R44, I could also see my error. That section of road is a much more significant vertical ascent than it appears when riding, and sticking with and even leading bunches averaging more than 30km/h along that lane was a far higher pace than I could have hoped to sustain. The rolling hills which follow that part of the ride were the sucker punch – sapping the remaining energy from legs and breaking the spirit. Another lesson learned – check the route profile of any new ride before the event!

Having rationalised the disappointment, I headed out for the regular club ride on the following Wednesday feeling upbeat again. I was rewarded with one of my strongest training 100km to date, finishing the last couple of hills at pace and feeling loose. In some ways it was a perfect place to pause for our vacation, but in others I just didn’t want to leave off training and risk falling back in fitness and speed. Whether, in fact, it’ll have any effect on my Argus in a week’s time is of course impossible to judge. What seems now like an untimely break may in fact have been an ideal taper to let muscles and body recover before the last few loosening spins leading up to the ride.

I guess whatever happens on Argus day, I’ll probably have a nagging thought that maybe I could have gone a few minutes faster without a break in training. There are a couple of overriding thoughts to help me put that doubt aside. Firstly, these last months of riding have never been about a fast Argus time – being in good shape for that is merely a welcome side effect of needing to step up my training distances to prepare for LEL. The second thought also revolves around LEL – at times the commitment to my training has been just as hard on Yoli as me. Some quality R&R time together was a perfect way to recharge before heading into the final three or four months of long preparation rides.