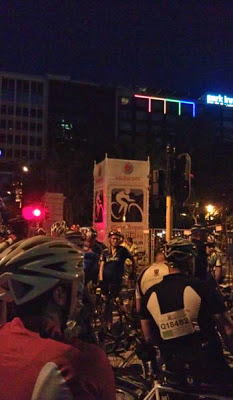 You’d think with five previous Arguses under my wheels there’d be little noteworthy about this year’s race, but even before the race began pretty much everything was already different. My first ever single letter seeding (Q) and offered a tantalising prospect of a first sub 4 hour time. The much earlier start time also resulted in me rolling into a dark Cape Town still wearing it’s pre-dawn shroud. The dimly lit street of empty parking bays with hardly a soul around suddenly didn’t feel like a good place to be unloading an expensive road bike alone. In previous year’s I’d usually been hunting the last free bay in this road as long rows of cars disgorged their riders and bikes. So I wound my way back to the main road, and found a parking bay with at least a few fellow riders around and a friendly parking guard who introduced himself as Ben. As I pedalled down Somerset Road towards the start area, I wondered if he’d still be there when I got back.

It was still dark when I reached the start area, visited the least offensively smelling portaloo I could find, and shuffled into my start chute, after some minutes wandering around seemingly finding every lettered chute except my own. Fortunately, being ever the obsessive planner, I was in plenty of time and ended up close to the front of our group. The cool dark morning was a refreshing change to the usual routine of hunching down over the bike desperately seeking out some sliver of shade to hide from a roasting sun. Rather less welcome was the nauseous bloated feeling that gradually welled up as we waited. Too late, I realised I’d broken a cardinal rule of races – I’d changed something without trying it. I had eaten Future Life for breakfast before a ride, and it had given me great energy, so it never occurred to me that drinking it as a shake would be any different. But the extra cup or so of milk now sloshing painfully around my tummy was doing nothing to settle my nerves and make me optimistic about being able to keep up a fast pace.

The starter’s familiar battle cry began to ring out at regular intervals as successive groups ahead of us got their race under way. Before long we were also rolling slowly forward, following the advancing green tape held by the marshals allocated to our group. With just one group (M) between us and the line, an odd and rather magical thing happened: I found myself staring beyond the riders ahead and the fiercely bright spotlights down the mouth of the start tunnel ahead of us. A dim grey dawn spilled through the tunnel, lighting it’s angular sides, it’s rays also picking out a few lone scraps of paper fluttering on the rising breeze. All sound seemed to fade away, there were no riders around me, I was alone – just me and the road ahead. For a moment, time and space seemed to expand and I wasn’t just looking at a few meters of tunnel, it felt as though I was literally looking at the whole ride ahead of me, the far side of the end was the finish line itself. My nerves settled down, and some inner voice was finally able to make itself heard – “you’re going to do it“. I’ve heard of 100m sprinters talk of focusing down their lane to visualize the finish, but haven’t experienced first hand what they actually meant.

I’ve never crossed the mats and started up the rise towards Hospital Bend with such a feeling of confidence in my ride. It was ludicrous really. Quite apart from the ever present chance of a mechanical messing up your time or worse, part and parcel of the Argus is massive bunches of riders, some of them inexperienced, creating a significant risk of a ride ending accident. As if all that weren’t enough, I was hoping to knock at least 35 minutes off my past best time, on what now looked set to be a windy day. Confidence at this stage seemed a foolish and dangerous feeling to be riding with. But it was there – I was pedalling easily, the pace was good, and the tightness in my legs was no worse than normal for the early stages of a race.

Once over the first real climb of Edinburgh Drive, the pace picked up and still with my fellow Q group riders we barrelled full tilt into the descent. There were a few scary moments as we overhauled some slower recumbents and parent-and-child tandems from N, and the odd straggler from M, but the bunch was disciplined and my speedo was nudging up to 50km/h for much of the charge down the Blue Route. There was just one small problem – my bike sounded like it was going to fall apart. What started as a small creak at the start, had been amplified by the bad road surface into Muizenberg and was now a loud and rapid knocking. It sounded like we were being strafed by machine gun fire, perhaps from the naval base just ahead. A quick assessment revealed two things: my bike hadn’t yet fallen apart; and stopping to find it would certainly waste time, and may not alter the chance or point at which it did fall apart. It was hard to ignore, but I knew the only practical policy was to ride as hard as I could until I either saw the finish line, or something gave way beneath me.

My average speed through Simonstown was still around 31km/h, and it was tempting to dream of a 3:30 time, but at Millers Point we came upon an impassable plug of riders stretching far ahead and spanning the full width of the road. There was just no way to get past without risking a crash, and so we dawdled along for what seemed like an eternity, sometimes only just above 20km/h. It wasn’t until the first proper ramps of Smitzwinkel took their toll on slower riders, and the plug broke up allowing me weave through the debris and pick up the pace again. I couldn’t recall the split time for the top of Smitzwinkel, but my average speed had dropped to around 29km/h as we crested the summit. I was fairly sure the fleeting chance of a 3:30 had already gone. It wasn’t a bad feeling to be honest. I knew that sort of time would be at the limit of my ability even without the Argus’ other challenges – that elusive sub 4 had really been my main aim for this year’s ride.

The fast and relatively easy riding across the top of the peninsula and before the descent into Misty Cliffs gave me some thinking time too – why had the knocking suddenly appeared today, when it wasn’t there on my loosener ride yesterday? Crap! I’d committed that cardinal sin not once but twice – I’d changed something. I don’t normally ride with a CO2 bomb. I don’t seem to get many punctures, and can fix them quickly even with a pump. But I figured with a tough target time, maybe a bomb could save a couple of minutes and squeezed one in my already tightly packed saddle bag. As the only thing on the bike I’d changed, it had to be the cause. Sure enough, grabbing it with a hand under my seat immediately silenced the clattering. A couple of mad thoughts went through my head: could CO2 canisters explode if banged repeatedly? and if not, could the banging find a weak spot on my Titanium seatpost? Neither seemed likely, but now I knew what was causing the noise the prospect of riding the remaining 50km in peace and quiet was too tempting. At the start of the descent into Scarborough, I stopped, quickly removed the offending bomb into my jersey pocket, mounted up and was on my way again. Despite the minute or so lost the silence, as the saying goes, was golden!

We’d been battling squally and unpredictable winds for most of the ride, but on the long stretch through Ocean View we get the full force head on. This is my least favourite stretch of any Argus, so it wasn’t entirely unexpected. A quick glance over my shoulder revealed a nice sized bunch slowly overhauling me, so I latched on as they came past and they quickly pulled me up to the group in front which I’d been just failing to catch for the last few hundred metres. My speedo was showing somewhere around 2:40 as we passed through Noordhoek onto the start of Little Chappies. I did remember the splits for the top of Chapman’s Peak – it’s pretty easy, around an hour earlier than your finishing time at these sorts of speeds. So clearly a 3:30 was now gone, but the sub 4 was very much still on. I figured that crossing the top in the next 10 minutes would give me leeway to make it even if I picked up a puncture over the closing stages. I’d gone about as far into the cave as I felt I could so, reassured on my progess, I backed off a little before the lights went out. Dropping a gear I span easily up Chappies and must confess to feeling a little smug with my pacing as I started to roll down the descent with exactly 2:50 showing on the Garmin.

Through Hout Bay and up the dreaded Suikerbossie there really wasn’t much left – the wind had died, and it was a hot and painful slog for legs that were beginning to threaten the cramps which have blighted previous Arguses. Fortunately, barring mechanicals, the summit is really the end of the Argus – the remaining 18km aren’t completely free-wheeling, but no one gives up and fails once they start the glorious downward rush into Camps Bay. As with Chappies, it’s also an easy split too – around 30 minutes or less to go to the finish. The Garmin was reading around 3:20. Holy Shit! The sub 4 really was still on. The last few Km passed in a flash – a couple of Wannabees club riders passed me on the way down, the last being Annemieke who I chatted with for a while until she pulled away. I was going well enough at around 35km/h, and without much extra zip in the legs was content to just keep steady rather than race for the line. I sat up and looked around over that last 2Km, enjoying the views and savouring the crowds and the atmosphere, hoping to remember this moment for a while – the day I rode my first Argus in under 4 hours. It had been a lot harder than I imagined, but at no point on the way around had I doubted that I would do it. Rounding the last bend, the real finish line came into view, confirming the prophecy of it’s earlier apparition – the clock stopped at 3:50.

After sharing a couple of quick beers and war stories with friends from the Wannabees, I headed back to my car. Ben the car guard was still there, patiently waiting for in the hot sun. I’m sure he would still have been there hours later as the last few finishers reached their cars too. Feeling in top spirits, I doubled the tip I’d normally give, loaded up the bike and headed home to celebrate properly with my family.


All photos by author.