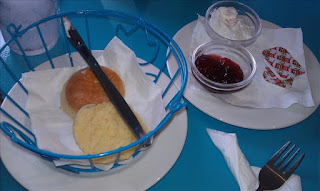 Lest the picture create the wrong impression, the last few weeks since the Monster has involved a decent amount of training. The midweek club rides have always included a social coffee stop midway though, and with our regular venue in Betty’s Bay closing down we’ve switched our allegiances too Pringle Bay nearby. Hence the scones. 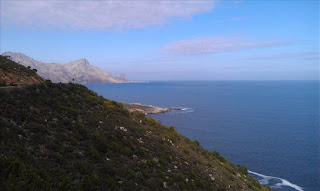 With not many weeks left until LEL, I’ve stepped up my training regime to six days a week: two core strength sessions at the gym; two 5am stints on the indoor trainer; and two road rides. Although in fact, with family commitments, the Saturday road ride has also been traded for an indoor trainer session on a couple of occasions. The hardest part by far about the road rides though is getting up in the dark and cold to put in an early stint before the club rides. So much so, in fact, that to-date I’ve managed it exactly once, on last Wednesday’s club ride. It did at least mean I got a decent 150km ride in.

I’ve also managed to largely overcome my lack of GPS navigation skills – or at least understand better the limits of the eTrex 30, and how to work with them. I’m still a little conflicted whether to go with a Route based  approach, which has the benefit of prompting me and lighting up at junctions, or a Track based approach which lacks this but shows on screen the exact planned ride with no chance of the devices auto-routing sending me down a motorway. I suspect I’ll err on the side of safety and go with the latter.

Another nice mental boost came this week too. The Sufferfest released their latest video, specifically designed to ease the boredom of power tests. It worked too – on the final 20 minute section where FTP is tested I pushed myself deeper into the red zone than ever before. The reward was there for the effort – since it’s last assessment in November, my FTP has lifted from 171w to 211w (with my LTHR rising from 138 to 152). That was way more improvement than I was expecting, but it’s a double edged sword. Every indoor session now gets scaled up by that same factor, meaning the known and loved sessions I’m used too will become significantly tougher.

The extra training is taking it’s toll though – with some significant aches and pains developing. I’ll be going in to Saturday’s 255km ride with a very sore lower back, a painful elbow, and some lingering knee pain. I guess that’s good preparation though – it’s not like getting up to ride on day 3 or 4 on LEL is going to be any less painful.


All photos by author.