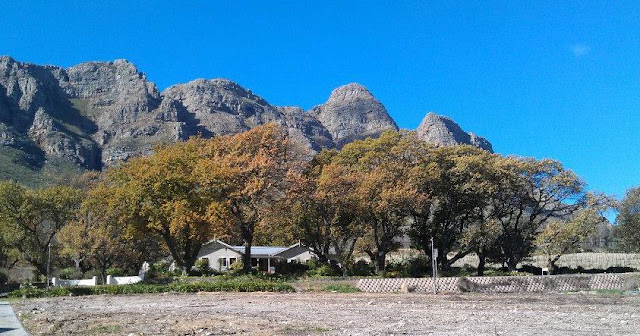 For a while, it looked like our good luck with winter riding weather had broken: the roads were wet, and my front lights picked out a fine drizzle as the four of us pedalled out from our 5am rendezvous at Waterstone. Joining our trio of riders from the previous 255km (myself, Penny Olivier and Henri Meier) was fellow London-Edinburgh-London (LEL) entrant, Emmerentia Jacobs, now recovered from an injured foot and eager to get some kilometres under her wheels.

We were still splashing through puddles and picking up road spray a couple of hours later as the dawn light crept over the mountains around us, and Franschhoek rose up out of the darkness ahead. It hadn’t rained, and the early morning sky was clear, but it was cold. My right foot was slowly becoming a numb icy block, and it was a relief to see the pass ahead. With Helshoogte already behind, this would be the second of four climbs Henri had in store for us on the route he’d planned. Somewhere around 40 minutes later we were all at the top, my arrival being predictably last. The exertion of the climb had warmed me nicely, but the sight of Emmerentia beginning to shiver from waiting so long made it obvious that the descent was going to drain the little heat we’d generated on the way up. Despite the cold the view was just too good to waste, so we stopped and had a quick snack looking out over the valley waking up below.

The descent was two things – exhilarating; and freezing. It’s hard to imagine a more wonderful stretch of tarmac, twisting and winding as it dives down the mountainside. Only a handful of cars broke the rhythm of whirring hubs as we sped down, views of the valley and Theewaterskloof dam gradually opening up as the pass unwound before us. By the time we’d run out of freewheeling I was seriously cold though. The stretch into Villiersdorp became something of a slog for me, and shifting gears had become a challenge with a useless frozen stump for a right hand. It was a great relief to see Henri veer off across the road for a welcome cafe stop to lift flagging spirits. The effort of the climb, together with the loss of body heat from the descent had sapped way more energy than I’d expected – or dressed for! Mental note to listen to Yoli next time when she says put on thicker layers.

Nicely warmed up from hot chocolates and coffees, the third climb of the day began almost before we’d left the outskirts of town. It turned out to be a bit of a disappointment though – from the Villiersdorp side it’s hardly more than a hill.  The long fast run down towards the Brandvlei dam did at least seem slightly more worthy of the term “pass”.  As we pedalled on into the valley the scenery went from merely marvellous to sublime: to our left the Franschhoek mountains had a light dusting of snow on the highest peaks; a much heavier cap of white sat on top of the Matroosberg towering up behind Worcester in the far distance; and in between a gold and red autumn carpet of vineyards lined the road leading towards them. 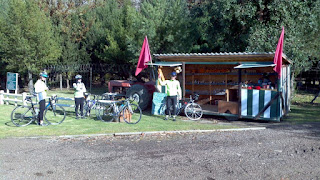 Even with the coffee stop and wonderful views, I was still struggling. With bizarrely opportune timing, the words “I could murder a coke” had hardly left my lips before Penny and I dropped over a small hill to see Henri and Emmerentia pulled over at a padstal. Henri tried to wave us on, but he was out of luck – I ignored him and headed straight to the counter for some fuel.

Coke and water is rather old-fashioned and out of favour compared to modern energy drinks, but on long rides it seems to help me push on through a low patch, without any bad stomach to plague me later in the day. It worked here too – our speed picked up considerably, and by one o’clock we were past Worcester, and heading out of Rawsonville in to the Slanghoek valley looking forward to a lunch stop. 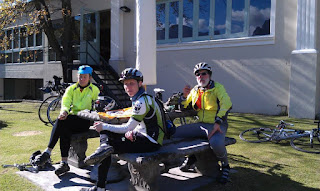 Unfortunately Henri’s favoured spot was hosting a wedding, and after passing a few other closed wineries, our next choice of Opstal stop wasn’t serving food. They had coffee though, and stunning views, both of which were good enough to make us linger for an extra cup as we ate snacks and sandwiches from our bags and back packs. 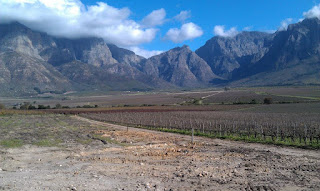 Slanghoek valley had one last treat in store for us before the final big climb of the day. Since seeing a road flooded sign some kilometres back we’d debated whether we’d be able to ride through to the R43. On reaching the ford before the end of the road we had our answer. The road was flooded for sure, but only to a depth of a few centimetres. Like kids stomping around in wellies, we pedalled and splashed slowly along the submerged concrete spans, dodging sizable holes that could easily have sent us for an icy bath. Sadly we weren’t quite slow enough for Henri to have time to snap a photo of the fun we were having wading across. The image will just have to live on in our memories of the ride.

Crossing the Breede for the fourth and final time of the time of the day, the mighty Bains Kloof lay directly in our path. Despite having climbed it from the other side a couple of months back, and Emmerentia’s assertion this was the easier side, I was more than a little daunted. Although my legs still felt strong, my energy levels really could have done with a nice hot plate of food at that last stop. We made good and fast progress initially, but gradually the gradient picked up. It never got especially steep, but the road wound up and on and up. There was very little traffic as the afternoon shadows gradually closed over the narrow cleft of the pass. The only sounds accompanying us up the climb were natural – babbling cascades of water splashing across the road and rushing down into the swollen Wit river to our left, the roar of it’s waters gradually softening as we steadily rose ever higher up the side of the valley. 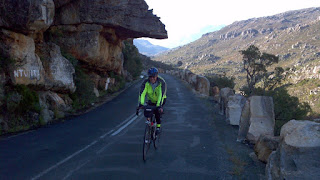 Rounding what I thought was one of the last corners, my spirits took a nasty knock – the road disappeared ahead, higher and further than I remembered. I was running out of steam when I felt a friendly helping hand in the small of my back. Henri had been snapping pictures of us coming under the rock arch, and had clearly seen my shoulders sag. I’d like to think I would have made it just fine solo – I was also immensely glad I didn’t have to find out.

The top of the pass was a sight for sore eyes and legs. After a very welcome stop for breath, we started the rapid snaking adrenaline blast down towards Wellington. This side of the pass was warmer, still bathed in the remaining rays of the late afternoon light. A pair of black eagles wheeled and mewed overhead, mobbed by a solitary crow presumably protecting family or territory. Dropping down towards the town of Wellington, the smell of fynbos gradually gave way to eucalyptus as the landscape switched from open mountainside to the wooded lower stretches. A patchwork of Boland farms and wineries lay below us, and somewhere just beyond the distant horizon lay home. Although now only around 65km away, all of us knew the route too well from fun rides to think of it as easy – a challenging procession of rolling hills, tough on any day, but with 200km behind us and the first breaths of south-easter beginning to blow it would be no easy final chapter.

After topping up water, snacks, and in Penny’s case full cream milk at a nearby garage. We rolled out of Wellington and started the last leg. Somewhere around Klapmuts the sun blazed it’s last few golden rays and sank slowly behind the rolling fields. At Henri’s call, we stopped and hastily swapped lights around so everyone was well lit front and back and rode on. The dark closed in around us gradually taking away the scenery and views of the day. We were a little floodlit cell of riders again, slowly counting off those last few testing ramps – Wiesenhof, Remhoogte, and finally Koos de Vaal. Henri’s route had been every bit as glorious as it had looked on paper, and as tough. With 268km on my Garmin by the time we got back to Waterstone, it had been the longest and most strenuous ride of the endurance training rides so far, and by far the best. A massive thanks to Penny, Henri and Emmerentia for helping create such a memorable day riding through what must be some of the most stunning scenery anywhere in the world.


Photos by author and Henri Meier