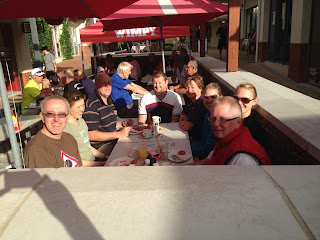 I haven’t written in a while. I haven’t ridden in a while. And pictured left is how my DC started this year – with the support drivers breakfast at the Wimpy in Swellendam. So clearly this blog isn’t really going to be about riding either, well not entirely anyway.

With the sparsity of blog entries, I need to go back a month and fill in the gaps to explain how I got here. Back to the One Tonner, which was my last ride with our DC Team. It ended badly with a rare DNF for me. Swinging left in Malmesbury the easy 100km were over and the full force of the strong South Easter blasted away the last of my will to finish the ride, triggering severe cramps which were the final ride ending blow. Luckily my friend Peter Nolan was nearby, and I grabbed the last available spot in his car to hitch a ride home. At the time I was angry with my team mates for dropping me, but in hindsight the blame was really all mine – the culmination of a series of misjudgements on my part.

The first of these errors was earlier that day, not being nearly clear or forceful enough with my other team mates about the need to stick together and ride together. With some very strong riders in the squad, we were already broken up and strung out over the first climb of the day. Despite a number of re-groupings after that, the early pace in catching the faster riders soon told in both my legs and those of some other riders. Just over Bothmaskloof my neck started to stiffen badly, and I just didn’t have the legs to catch and keep up with the group for a third time. My ride was over.

The real error though had been months back when I’d ignored all my instincts and agreed to take part in the DC. I’d read many reports about it taking weeks or months to fully recover from the physical effects of a ride like LEL. I knew there was a significant chance that I would not be in shape to train properly for a ride as demanding as the DC. My heart over-ruled my head and I found myself committed to a ride and struggling to put in enough time on the bike with my LEL induced neck injury. It was only ever going to end one way, and that end came by the side of the road in Malmesbury.

Over the next few days the team went through a major blow up as I wasn’t the only rider unhappy with the fragmentation and lack of group riding spirit on the day. It was a necessary process though, and when passions subsided the team was short of a few riders, but team spirit had been fully restored. The aftermath of the storm had also resolved the long problematic spot of our team support driver. Unable to ride, and with a car almost tailor made as a backup vehicle, it was an easy decision for me to make. I could still contribute towards the team’s DC even if my work would not be on the bike.

So here we all were – at the backup drivers breakfast. All Wannabee teams were safely on their way, and we had an hour or more to relax before needing to be at the first team support point, the feed zone in Ashton. William had kindly loaned me his trailer, which was loaded with the rider’s coolboxes, water and ice. One of my club mates, Charles Nesbitt, was riding with me as support crew and spotter as we drove towards Ashton. It was a beautiful sunny day, a total contrast to last year.

The team arrived at the support point much later than we’d expected. Marc had suffered a severe mechanical, and they were already down to 11 riders even though the race was only half done. Somehow though, he’d managed to get his bike fixed and was only minutes behind them – he looked shattered and must have turned himself inside out to make up the lost ground. 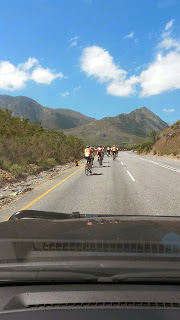 The remaining 100km of the ride Charles and I followed the team. There were two pre-planned water stops where we packed out the full trailer, coolboxes lined up along the road for easy access. We also had a couple of unplanned stops for mechanicals, and a quick water refill towards the end as the heat kicked in. We got lucky with the unplanned stops in having a decent space to get the car fully off the road – although in one case I nearly misjudged the mass of cyclists all around and only at the last minute corrected my course into the small turn off, narrowly averting disaster.

It was interesting and very different to see the riders from behind, and gave a totally different perspective on the ride. Despite having ridden the DC last year, I was also struck by just how tough a ride it is, especially over those last 50km as legs tired, wind and heat rose, and the killer rolling hills reared up one after the other. It was with some pride we saw the guys still together as a full team of 12 up that last hill – Charles commented that no other team around us still had all of their riders. They’d overcome the divisions from the One Tonner, and a few niggles around the 130km mark and done the impossible. They had become a team, cohesive and working together, and getting each other to the finish as a complete team. Despite not being on the bike, it was great to have been a part of it.