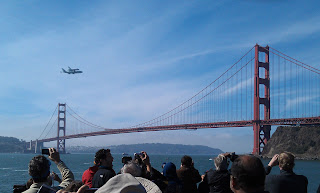 The picture left doesn’t have much to do with cycling but it is what has kept me from my bike and training for the last week. Not the space shuttle’s final farewell over the Golden Gate Bridge. That was just a happy coincidence of timing with my company’s management meeting in San Francisco, the trip for which was the cause of me missing out on riding.

Our US office is actually just over the bay from the city in Sausalito, and sits at the foothills of some tremendous scenery and cycling. Sadly, despite the kind offers from my local colleagues to organise me a ride or two, it simply wasn’t practical to take 3 or 4 hours out from the few days of my trip for a decent ride. Running is not my favourite form of exercise, it probably wouldn’t even come second on the list. It is very efficient on time though, and luggage space too. So instead of helmet, cycle shoes and pedals, I crammed new sneakers and two pairs of running gear into my already bulging suitcase.

Anyone who has flown long distance will be all too familiar with being wide-awake in the small hours of the morning, however tiring the previous day’s travelling.  I may already have mentioned that I’m not the keenest of runners, but after having gone through all my emails and news items, it was definitely preferable to trashy hotel TV or another hour of trying to get back to sleep. Knowing all this in advance, I had made a definite plan to go out for a short run the Tuesday morning after my arrival. I’d even checked what time sunrise was, in order that the return leg would be accompanied by the first rays of morning light over the bay. I  just wasn’t completely sure I’d actually do it, until I found myself outside the hotel at 5:45am.

The first few minutes were predictably uncomfortable, not having done any significant running for many years, and wearing brand new, unbroken in sneakers. My goal was to run against time rather than distance, to see if I could keep up a steady pace for an hour without stopping or walking. Over the first few blocks I made the mistake of looking at my watch far too often, and time seemed to be passing even more slowly than my feet were moving. Gradually though I got control of my breathing and settled into a manageable work rate. The half hour turnaround mark coincided exactly with the rise of highway 101 bridge across the spur of the bay near Mill Valley. And, just as planned, the first strides back were greeted with the faint grey hint of dawn. I must confess to feeling rather smug with my timing, and smugger still as I rounded the last curve and the hotel and more importantly Poggios, the coffee shop next door, came into view. I might have managed my first full hour of continuous road running for more than five years, but being a cyclist at heart there was no way I was going back for a shower without a cappuccino and a muffin.

I’d every good intention of running the same route again on the Thursday morning of my trip, but our company dinner and too many glasses of wine on Wednesday evening banished that little idea. I did make up for it on the Friday morning though, covering the 8.3km of the same route this time in 54 minutes, 6 minutes quicker than my effort on Tuesday. I wasn’t consciously trying to beat the time, but feeling strong I inevitably ran a lot faster on both the leg out and back. 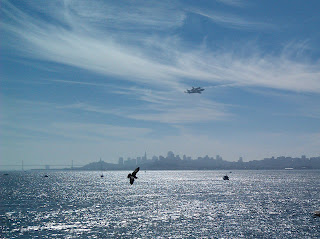 The only annoying part of both runs was seeing so many guys out cycling. It would have been great to have had time to join them on two wheels. All the more so because cyclists are giving so much more space and respect in the US than home in SA. A situation all too sadly emphasized in the last two weeks, with one cyclist knocked down by a motorist and two hijacked, all on our regular training routes around Somerset West and Stellenbosch. It’s a shame with such great cycling and so many enthusiastic riders here at home that we seem to be playing a game of Russian roulette against drivers and criminals every time we go out to ride. Worse is that the local law enforcement seem unable or uninterested in doing anything against the situation. I guess in the grand scheme of their challenges, cyclists are just one small part but that doesn’t help those knocked down, injured, and robbed of their bikes.

America may have waved goodbye to the shuttle and NASA handed the space race over to private consortia, but they do at least make it reasonably safe for their citizens to enjoy a much older and more peaceful example of transportation technology, the bicycle.

‘What’s in a name? That which we call a rose. By any other name would smell as sweet.’
Ask Yoli how many times I’ve prevaricated over joining my local cycling club, the Wannabees, and her answer will almost certainly be accompanied by a rolling of eyes. I should be old enough to know better, but the stupidest of reasons has put me off each time I’ve visited the website to download the forms: the name.

Daft as it is, the name has kept putting me off – cycling is purely a fun past-time for me. Although I can get extremely competitive with myself, I hope I don’t take myself so seriously that anyone one would label me a wannabe. Except now they can, albeit with a slightly different spelling. I have got over myself, seen sense and become a Wannabee member. In the end, the simplest of reasons decided it for me: safety. I’ve been lucky enough to have very few near misses in the four years I’ve been riding solo, but cycling accidents and hijackings are on the increase and with Ben and Yoli to consider the risk feels too high. Cycling as a group is generally safer, and having training partners is an added motivation to get out of bed at 6am on a cold and dark winters morning to go ride. 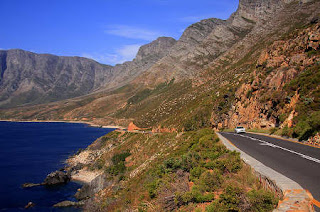 My first club ride was the midweek Wednesday ride a couple of weeks ago. And what a ride it was As if to both endorse my decision to join, and also chastise me for not doing it before, the guys chose a stunning route for my first ride: Clarence Drive, the scenic coast road from Gordon’s Bay.  I’ve wanted to ride that road since I first started cycling in South Africa, but had shied away from riding it solo because of the lack of a safety lane.

The route and the ride did not disappoint, either on that first week or this Wednesday’s ride when we went a shade further and turned around after climbing the short but steep hill just beyond Rooi Els. The scenery is every bit as majestic when viewed from the saddle, except that it slides by more slowly so you get to appreciate it more. Not to mention being able to hear and smell the ocean crashing against the rocks, in places only a few meters down from the road. The wildlife hasn’t let us down either. We’ve seen mongoose, seals, and large troops of baboons on both rides. In the next few weeks, we should be enjoying sightings of whales too, as they arrive to nurse their young in the bays.

From a cycling perspective, it’s great training too. Riding as a group pushes me to ride faster than I typically do when training solo, especially on the climbs. There’s no room to shift down to the easiest gear and grind slowly up a slope if you have a group to keep up with. Even less so if you’re taking a turn at the front of the group, I did on a couple of short stretches this week

The final bonus from joining also came with a bit of a moral dilemma – John offered to put my name down on their DC team list.  It meant backing down from the provisional DC team that a group of us from The Hub had started to pull together, which wasn’t an easy decision to make. In the end though, the option to train locally with a group of experienced riders who had done the event before was a compelling factor given my always limited time for riding.

So there it is, I’m proud to officially be a Wannabee and Yoli gets to enjoy poking fun at me for being a wannabe every time I don the jersey. Turns out to be more in a name than you might expect.