Somehow, throughout the whole year so far I’ve completely forgotten to even mention a ride that has established itself as one of my main objectives for the year. In fact it’s a significant bucket list ride in it’s own right too, making it’s omission from this journal an even greater oversight. So to avoid next week’s blog entry appearing totally out of context, and the whole story of how came into being remaining untold, it’s time for a rapid catchup.

Towards the end of 2013 I was still suffering a fair degree of post-LEL pain. With no road rides on the horizon to prepare for, it seemed rather pointless to keep punishing myself on the road bike. It was simply time to relax and enjoy riding purely for the fun of it again, and with this in mind one Friday afternoon in late November found me at the back of the garage digging a rather sad, dusty and neglected mountain bike. My hardly used Specialized Stumpjumper had been languishing there since the Audax bug had bitten. That needed to change. Some air went in the tyres, lube on the chain and it was ready to ride. At some point it also took a trip to William’s to have the slime replaced, and a dropper seatpost fitted too.

The first few rides were simple orientation to the local club trails – great fun, a few spills, and in general a lot of smiles being offroad and in beautiful scenery again. No stresses or pressures to the riding, just simply enjoying being out on the bike. And then sometime in December 2013 the club announced their Monster ride. For the very brave, a loop around every stretch of the club’s trails – around 90km in total. Even with my road endurance I knew that would way beyond me, so I opted for the mini-Monster – a slightly shorter version at 55km. It was still around double the sorts of distances I was normally used to riding on a mountain bike though. Unsurprisingly, the legs and lungs really felt it on the day – not to mention the fact that the last couple of hours were in the full heat of a summer scorcher.

One of the drawbacks with writing this so many months after the event is I don’t really remember much in the way of details to the ride, or the names of those I rode with. I do remember our bunch started at a healthy 15 or 20 riders, but a slow attrition of riders saw us down to 3 or 4 finishing those last few kilometers together. I do recall a great spirit amongst those of us who finished together several hours later, and that the guys were Stellenbosch riders since we spoke about G-spot which I knew about but had not yet ridden. I also recall a spectacular and quite nasty tumble off the side of the trail and into the vines. The trail came downhill and swung left 90 degrees. I carried too much speed into the corner and took my eye off the line through the bend. The result was my wheels strayed off the flat trail, and lost traction as they slipped down the bank on the far side. It was fast, and painful, and left both legs bloodied and shorter of skin than I’d have liked.

Despite the injuries, the seed of an idea had been set – with the tail end of 2014 likely to involve a lot of time on the road bike qualifying for PBP, why not spend the first half of the year mountain biking rather than getting sick of riding the same road routes. By Christmas that idea had grown into a full fledged goal – instead of just a vague plan do more mountain biking, why not aim at a real challenge? Why not take on the daunting 230km Trans Baviaans 24 hour marathon – a race that had been on my bucket list pretty much since moving to South Africa. I mentioned the idea at the coffee stop on one of our Wednesday club rides, and the words were barely out of my mouth before Penny and Laurence had signed up to be part of the team. Initially Adele also showed some interest and our whole team was made up of Wednesday group road riders. When she later had to pull out there was no shortage of interest in a place for this prestigious and over-subscribed ride, and our spare team spot was snapped up by Vicki Mohr. We couldn’t have wished for a better substitute – keen, fit mentally very tough, and a great personality to have on the team. 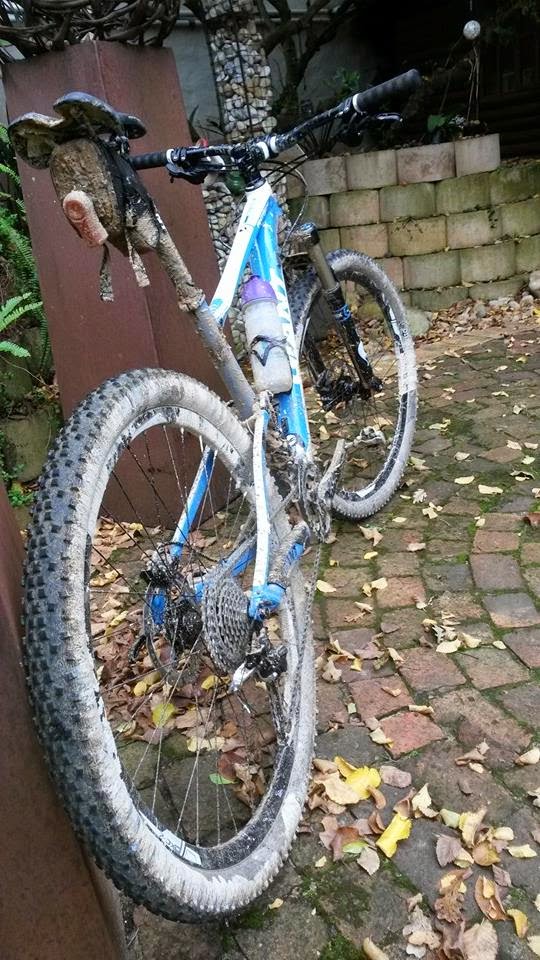 I must confess I wobbled a little in my commitment during the early months of the year and nearly pulled out. Not because of lack of interest in the ride, but the Joburg 600 DNF dented my confidence and for a moment I wobbled. I wondered if I was becoming distracted doing and risking my qualification for PBP. The successful UK 400 put all those doubts behind me though and I started really looking forward to the ride, and getting the team together to train for it. In fact, my enthusiasm was back to such an extent that it was time for an N+1 moment. Whilst Stumpy was a lovely ride, the 26er was never going to be the ideal tool for this type of ride. I needed no further excuse to go and buy the Giant Anthem 27.5 which I’d surveyed longingly several time on visits to Williams. I didn’t even get a chance to name the lovely new ride – Ben beat me to it: Blou Wildebees or Beast for short.  It would have been a stroke of genius for anyone, but for a 5 year old it’s quite remarkable. He barely took a minute to come up with the name too – and it even has the right colour in it!

So here we are, almost caught up. Trans Baviaans is around the corner. We have not trained that often as a team, but we’re all pretty fit and strong. The rides we have had have gone well though, including an epic adventure day around Botelary Hills trails organised by Laurence. Eight months ago Yoli, Riku, Erie and the kids and myself were sitting at the campsite at Gariep Dam. I was tapping away on our little travel laptop, desperately hoping the 3G connection would last long enough to get our team entry submitted. Somehow it did, and somehow the time between then and now had gone. Tomorrow we would be loading up the car and heading off to Willowmore to take part in one of the greatest mountain bike adventure rides in the country.